A native of Chicago, Illinois, Gene Chandler a.k.a. Eugene Dixon was born July 1937, and in c1955, like many a young boy and girl, while still at high school formed a group; his went by the name the Gaytones. His debut on record however was not until 1961 as lead singer with the Dukays. It was his third outing on wax, the above Duke Of Earl issued on Nat 4003, that was to change the course of his history. The record was picked up by Vee Jay with the help of William E. Sheppard (owner of the Nat label, who also joined the company as a national promotions manager, he later formed the Constellation label) and released in 1962 as by Gene Chandler on Vee Jay 416. Then, due to its instant popularity and possible 'novelty' value, it was re-released as by 'The Duke of Earl'. The record, a sort of corrupted Doo-Wop, was, as far as the Modernists in the big Mecca Ballrooms in southern England were concerned, the new sound, the, as yet un-named: Soul 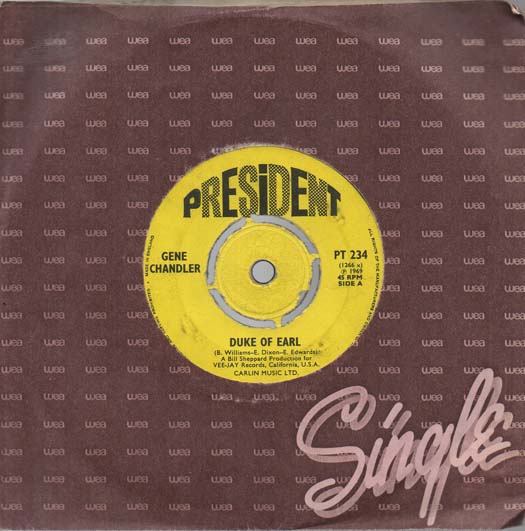 Ladies and Gentlemen; The Duke.